Create an Account - Increase your productivity, customize your experience, and engage in information you care about.

Riddles and Games - History at Home

Kids have been playing indoors on rainy days for as long as there have been houses. Here a few fun games you can try. If you want to share, you can take a video and post it on Facebook. Be sure to tag the Historic Commission and always be sure to ask your parents before posting anything online.

People have been playing Blind Man's Bluff since at least Ancient Greece and evidence of the game can be found all over the world.

This one is sort of like tag with a twist. One player gets blindfolded. Spin them around three or four times, just enough that they're disoriented, and then everyone else tries not to get caught.

Ever played I Spy? Well, Lookabout is a very similar sort of game. One player chooses a small object, something like a pen or a spoon or a small toy, and hides it somewhere. It has to be visible but could be up high, or really low, or in with a bunch of other things. The other players then come back into the room and have to search for the object. When you find it, don't say anything. Just go and sit down without telling anyone. The last person who hasn't found it hides the next object.

You can play this game with anything, but they called it Pass the Slipper because that's what they played with in Victorian times.

This one can be a hard one, but guaranteed to get at least a few laughs.

Everyone starts out sitting in a circle. Going in turns, each player says either 'Ha', 'Ho', or 'Hee'.

If a player laughs at any time, they're immediately out. The last player left wins.

You've probably played this one before without even knowing it. Quoits is an old name for the game Ring Toss.

Take a stick (or five if you want a challenge) and push it into the dirt so it stands up straight. It should be about a foot tall. If you set up 5, they should make a square with one in the center.

Next, take some rope or wooden rings or anything else that can make a six-inch circle that stays rigid. Each player takes turns throwing rings to try and get it to land on the stick. If you're playing with 5 sticks, then the one in the center is worth 2 points to the 1 point of the outer sticks. The first player to score 10 points wins.

How Many Miles to London?

This game is like Blind Man’s Bluff with a twist. One player starts blindfolded. This player is “It”. The other players stand in a line some distance from It. This could be as close or as far as the players agree on. From there, the players ask It for directions. The players must follow these directions. Then they guide the blindfolded It to where their line started from and It must follow the same set of instructions. When It believes they are where the players are, they can reach out to try and tag someone. The other players can duck or dodge, but cannot move their feet. If It tags someone, they are the new It and the game starts again.

Start by making a shape on the ground. It can be any shape you want and it has to be at least big enough that two players can run through it at the same time. One player is “It” and they cannot leave this zone. The other players must try to run through this zone without getting caught. If they get tagged, they join hands with It and help to catch others. Each player added joins the line but only the ends of the line can tag. The rest of the line can make it hard for other players to cross, getting in their way or trapping them. The last person left wins and is It for the next round.

Riddles have been a popular way to pass the time since at least the Bronze Age. Why not give these a try? You can find the answers at the end of the packet. If you answer all of these, see if you can make one up and share it with your friends. 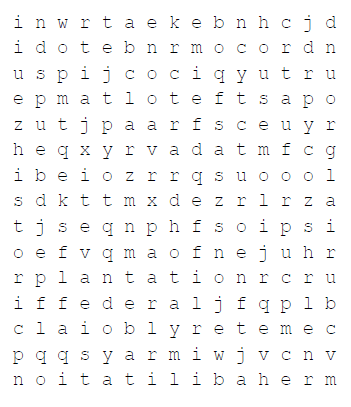 All through our history, people have needed to find ways to keep secrets. One of the ways they did this was by putting things in code. One of the ways they would do this was by swapping one letter for another in a word. Can you figure out which historic document this text was taken from? Here’s a hint: when it was written, the United States was still using the British spellings forsome words.

If you could solve that one, here’s another one that’s a little harder. See if you can solve this and find out which one of our presidents gave the speech this text was taken from.

If you're having trouble with the answers, you can find them in the PDF download.
Online Bill Pay
Forms
REPORT A CONCERN
Notify Me
EMERGENCY ALERTS
Community Aggregation
PROJECTS
COVID-19
STONEHAM RECREATION
PROJECTS