The Committee consists of eleven members, at least seven of whom shall be at large citizens who do not serve in any elected or appointed capacity in the Town

Members are appointed by the Moderator.

The Moderator is to appoint such other individuals to said Committee as are necessary to cause; said Committee to be apprised of eleven members at least seven of whom shall be at large citizens who do not serve in any elected or appointed capacity in the Town and charge said Committee to assist the Selectmen/Town Administrator in the implementation and the development of the Town owned land or leased land commonly known as the “Railroad right-of-way “as a Linear Park/Greenway with a continuous multi use trail and associated uses from the Woburn City Line to recreation Park at Gerry Court; and that the Selectmen/Town Administrator be instructed to negotiate with the Massachusetts Bay Transportation Authority to amend the 85 year lease to 99 years as required by the Federal Government for 911 linear feet of the right of way from the Maple Street to the Woburn City Line.

The Tri-Community Greenway will bring open recreational space to Stoneham, Woburn and Winchester. The Stoneham portion is located on a right-of-way from the Stoneham Branch of the Boston and Lowell (later the Boston and Maine and MBTA) railroad, which stopped passenger service in 1958. This linear park will create a place to bike, walk and enjoy nature in the heart of our community.

The project to create a multi-use trail is being directed by Massachusetts Department of Transportation (MassDOT) and is paid for with state and federal funds. 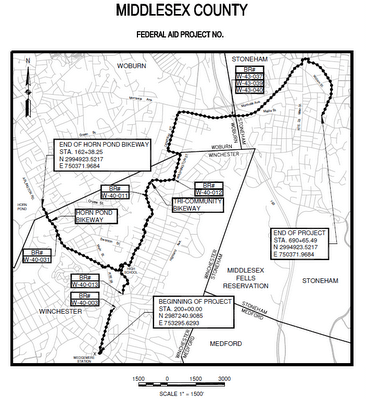